There Be Saints and Sinners 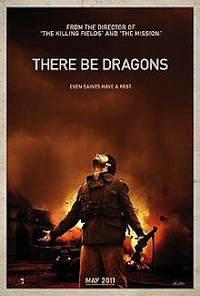 There Be Dragons, like a fine delicacy, can only be fully appreciated, it seems, through an acquired taste.

This newly released film, written and directed by Roland Joffe, of Oscar-nominated The Killing Fields and The Mission fame, tells the story of St. Josemaria Escriva, who founded “The Work of God” (“Opus Dei” in Latin), a world-wide phenomenon infused with the spirit of early Christians, where God is found in ordinary work.

That Escriva’s approach is utterly grounded in what it means to be human is revealed in the opening Oscar Wilde quote, “Every saint has a past and every sinner has a future”—a recurring theme, which provides the rationale for the quest for God, given our weak human nature, and the corresponding role God gives each of us.In Escriva’s case, the role was rather large; thus the epic nature of the film.

When There Be Dragons opens, it’s 1975. Escriva has just keeled over from a heart attack whereupon his cause of canonization surges—the requisite miracle for “beatification” provided when a nun with a tumor prays to God through Escriva’s intercession, and is cured. A journalist, who’s writing about him, realizing his father is from the same town, decides to try and reconnect with his estranged elder to see what, if anything, he knows about Escriva: A mother lode, it so happens.

Some critics have less appreciation for Joffe’s substantial achievement—if not a masterpiece, then certainly masterful—because their base of understanding is limited.

But, for those, for instance, whose lives were directly and intimately affected by the Spanish Civil War—Spain devastated; beloved relatives, one of 500,000 souls, lost forever in the fighting—the appreciation is immense. As one Spaniard commented on The Hollywood Reporter review, rating the film full of missing pieces, it had one piece right, namely: “… from most Spanish people’s point of view (it) is the best approach Hollywood has done to our civil war.”

While the film is not without its flaws, as a screenwriter, I marveled at the craft Joffe brought to the story: the element of surprise, conflict, and more conflict—the very essence of drama—and directorial skill and cinematic vision on par with David Lean.

Of course, flashbacks are generally a “no, no.” That’s because the action derives from the storyline—in this case an artifice—from which you are flashing back, lessening the forward-momentum.

And, while Charlie Cox, who played Escriva, gave an overall masterful performance, sometimes he seemed to translate Escriva’s cheerfulness without enough reference to the weight of his human frailty, making that smile he would flash seem more a preternatural gift than a triumph over weakness—for love.

As the current prelate of Opus Dei, Bishop Javier Echeverria, commented on the portrayal of Escriva, while it was impressive, he was “mucho mas!”

All of which means, Escriva’s story will just have to be told free of the artifice, dramatic though it may be.

Joffe certainly whets the appetite for that story!

For more information on There Be Dragons, including cinema locations and times, see http://dragonsresources.com/.

Here’s a PDF version of the published article
http://www.stjosemaria.org/dragons/pdf/ThereBeSaintsandSinners.pdf.
Posted by Mary Claire Kendall at 2:31 PM