“The Way”—Journey of the Heart... and Soul 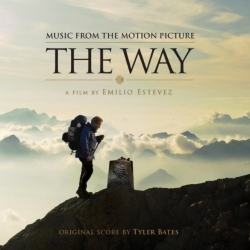 A good friend of my father has seen Emilio Estevez’s film The Way three times.  The Way is about a father who travels to France to recover the body of his estranged son, who died in the Pyrenees during a violent storm—just one day into his journey along  “El camino de Santiago,” also known as “The Way of St. James.”
My father’s friend is about to see it a fourth time.  Now that I’ve seen the film, I know why.
Not only does Martin Sheen, who portrays the father, give a brilliant performance; but the screenplay by Estevez, who plays the son, is masterful; the direction, also by Estevez, production values and cinematography, superb.
Quite simply, this film, which has Oscar written all over it, is a beautiful, mesmerizing film, with layer after layer of meaning—achieved without any 3-D technology or special effects extravaganza.
Its secret is the subtle yet rich, multi-dimensional portrayal of humanity and spirituality.  Nothing hits you over the head, except, of course, the sudden death of Daniel (the son) at the outset; the magnificent vistas along “The Way” as Tom (the father) relives and honors his son’s memory; and, at the end, when the four travelers, Wizard of Oz-like, arrive at the Cathedral of Santiago de Compostella in Galicia in northwestern Spain in a stunning denouement.
Tom, an American opthamologist, initially had no plan other than to bring the remains of his son home to California. Then, he begins to learn about the 800-kilometer-long “El camino” leading to the Cathedral, where, tradition has it, the remains of the apostle Saint James are buried.
In 40 or 41 A.D., Our Lady traveled with angels to see St. James in Zaragoza in northeastern Spain, and tell him Jesus wished him to return to Jerusalem, where he would be martyred.  St. Augustine writes about the episode in The City of God, revealed through an apparition to a nun, the only such apparition before Our Lady’s Assumption. Our Lady was carried by angels at night on a cloud to Zaragoza. During the trip, the angels built a pillar of marble and a miniature image of Our Lady. When they all arrived, Our Lady delivered Jesus’ message to St. James, and also asked that a church be built on the site of the apparition. The main altar, she said, would feature the pillar and image and special protective graces would flow to the people of Zaragoza for their devotion to Mary and Jesus.
Legend has it that St. James’ remains were transported by boat from Jerusalem to northwestern Spain. When his burial site was discovered over 1000 years ago during medieval times, “The Way” began attracting numerous pilgrims and became one of the most popular pilgrimages, together with those to Rome (Via Francigena) and Jerusalem. However, the Black Death, Protestant Reformation and 16th century political unrest diminished travel along “The Way,” down to just a few pilgrims by 1980. Then interest surged, whereupon travel steadily rose to nearly 5,000 pilgrims in 1990 and over 272,000 twenty years later.
That’s the awe-inspiring backdrop of the film.
While, Tom, a non-practicing Catholic, initially has just one purpose when he arrives, he soon feels impelled by some mystical force to join the pilgrims along “The Way”—putatively, solely to honor his son’s memory.
It’s a heartwarming journey full of colorful scenic and cultural vignettes and unforgettable, all-too-human characters, searching for more meaning in their lives. This is especially true in the case of the three characters Tom ends up traveling with, whom, as he plays off of them, inject humor as well as pathos as the layers of their lives are peeled away—revealing their loss, brokenness and pain.
The film has a touching scene upholding life’s sacredness from conception.  However, the cremation of Daniel and related details could render Tom’s choice problematic given his initial weak faith. “The Church permits cremation,” the official Catechism says, “provided that it does not demonstrate a denial of faith in the resurrection of the body.”  And, while his choice is clearly cinematic—albeit Daniel’s appearances along the way are equally if not more compelling—it’s important to note, cremation is “permitted,” not “recommended.”
This is the seventh time father and son, Sheen and Estevez, have worked together.
Interestingly, in an LA radio interview on “The Busted Halo Show with Father Dave,” Estevez revealed the film’s inspiration was none other than a pilgrimage Sheen and grandson Taylor made a few years earlier on “The Way,” where Estevez’s son, then only 19, met and fell in love with his future wife, soon moving to Spain, where his great-grandfather, to whom the film is devoted, was born.
Truly, it’s a family affair—and not just for Sheen and his family but for many other families, as well.
Published in The Wanderer, December 15, 2011
Posted by Mary Claire Kendall at 9:52 AM No comments:

By Mary Claire Kendall
Hugo is one of Hollywood’s best offerings this Christmas season.
It’s Martin Scorsese’s homage to motion picture pioneer Georges Méliès, inventor of special effects, born 150 years ago on December 8, in Paris; and like Scorsese, a Catholic.  It’s a magical film, not just because, ironically, of its own deft utilization of 3-D special effects, but because of its uplifting message.
Based on the novel, The Invention of Hugo Cabret by Brian Selznick, far from cheapening human love, Hugo enriches it—love of one’s art, of husband and wife, father and son, and of friends—in this case, the protagonist, an orphan named Hugo Cabret, played by Asa Butterfield, and Isabelle, living with Méliès and his wife, played by Chloe Grace Moretz, who helps Hugo solve a mystery that unlocks not only the film’s mystery—why Méliès, played by Ben Kingsley, is so crabby; but the mystery of life.
Through the persistence and bravery of Hugo, Méliès finally, after much resistance, realizes “the story’s not over yet.”
Known for such masterpieces as A Trip to the Moon (1902), Méliès built the first movie studio and produced some 500 short films, but was forced into bankruptcy in 1913.  With the outbreak of World War I, the French Army melted down most of his films to make boot heels for the Army, ending his filmmaking career.
While it is true audiences gradually tired of Méliès’ special effects, given how they overshadowed a story; another factor in his demise was Thomas A. Edison, Inc.’s distribution of A Trip to the Moon without paying Méliès royalties—ironic, given Edison’s own aggressive campaign of enforcement against copyright infringement vis-à-vis his properties.
“He [Méliès] lost basically most of his financing,” Scorsese explained to Jon Stewart on The Daily Show, “when the bigger companies came in… What happened (is)…  [Thomas Edison and his associates] were just taking the films and making dupes of them. So that was one of the reasons why he [Méliès] was finished financially, ultimately.”
But, then God always brings good out of evil.
With the help of other filmmakers, Méliès became a toy salesman at the Gare Montparnasse station, made famous by Claude Monet, which is where the film imaginatively brings his story to life.
His nemesis, Hugo, lives behind the walls and above the station, where he ensures the station’s many clocks run on time. It’s a family enterprise; or, at least, was. His father, played by Jude Law, recently deceased, appears in flashbacks; and his Uncle Claude, an inebriate, is soon out of the picture, leaving Hugo to fend for himself.
Hugo comes to Méliès’ shop to steal items for his work and in his quest to repair the automaton his father found at the museum where he worked.  As his father showed him, it’s the missing key that will bring it back to life. Méliès is a stern taskmaster and has little patience for the ruffian who comes to his shop.
Hugo nimbly survives—stealing food; fending off the rigid, buffoonish station inspector, played by Sacha Baron Cohen; observing the lives of visitors to the station; slipping into the nearby theater to watch silent film classics; and maneuvering the station’s labyrinthine passageways.
One day, Méliès gives him the chance to show his skill at repairing toys and, duly impressed, gives him a job.  That’s how Hugo meets the beguiling Isabelle who “lives” at the station—in the book store, whereupon the mysteries begin to unfold.
The story is particularly poignant for the way it mirrors Scorsese’s own early life, trapped in a world apart from other children in New York’s Little Italy when he suffered from asthma, finding solace in film. He was fascinated by 1950s 3-D films and later helped rescue filmmakers, who like Méliès, had seen better days.
While the 3-D artistry in highlighting mechanical and architectural wonders is enchanting, the real artistry lies in how Scorsese touches hearts.
As Professor Ian Christie of London’s Birkbeck College said, “To look at (Scorsese’s) films without an awareness of their spiritual dimension is to miss an important part of what makes Scorsese one of today’s great artists.”
Ultimately, the film is not about broken machines but broken people, who, with the help of others, can come back to life; and how, in life, as with a clock’s intricate parts, each of us has a unique role to play.
That Hugo is delighting audiences of all ages is testament to its cinematic workmanship, unfolding mystery, and uplifting message.  Not only that, it is delighting critics— winning both Best Picture and Best Director from the National Board of Review, and Best Director from the Washington and Boston film critics associations—and promises more not only at the Oscars but in how it shapes the landscape of filmmaking for years to come.
Published in The Wanderer, January 5, 2012.
Posted by Mary Claire Kendall at 9:43 AM No comments: