It is said—our strength is our weakness. In the case of Spencer Tracy and his son John Ten Broeck Tracy, who died in Acton, California on June 15, 2007—five days after the 40th anniversary of his father’s death—nothing could be truer.

“Spence was considered by many to be the greatest actor the screen had ever seen,” his good friend, 82-year Paramount veteran, A.C. Lyles told me.

Yet, the painful emotion he felt upon learning, in 1925, that his baby son, John, was deaf was the hardest of blows. The only thing Spencer Tracy was not good at, he candidly admitted, was “life.” 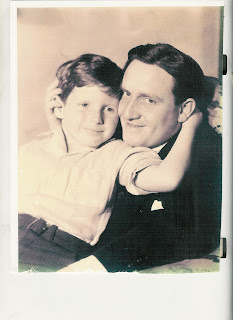 Spencer Tracy with his son John, c. 1928-29,
prior to his film debut in 1930 in Up the River
His son John, on the other hand—dealt a whole series of setbacks, in what, at age 22, he would term “My Complicated Life”—was great at life.

If only Spencer Tracy could have read the script, he would have discovered John would soon hear the voice of God a little more loudly; see with the eyes of faith a little more clearly; and grow a big heart, drenched with hope and optimism.

As John’s daughter-in-law Cyndi Tracy said, “he just always had an uncanny ability to accept God’s love and always knew (his suffering) was going to be for a greater good.” It was never “Why me?” or “Poor me.”

God, he felt certain, had a plan.

When Louise Treadwell met Spencer Tracy, her theatrical star was rising. Spencer, four years her junior, was just starting out.

It was early 1923. They were both arriving in Grand Rapids, Michigan to play in the same stock company. As fate would have it, they alighted the train station platform simultaneously.

The attraction between these two polar opposites, descended from, respectively, English blue bloods and working-class Irishmen, was immediate. Six weeks later, in between the matinee and evening shows in Cincinnati, Ohio, they got married. Nine months and two weeks hence, on June 26, 1924, in Spencer’s hometown of Milwaukee, their little bundle of joy arrived.

One day, while John lay napping, the screen door accidentally slammed behind Louise and he kept peacefully slumbering on. She immediately, instinctively knew he was deaf. The diagnosis came back as nerve damage of unknown origin. Unbeknownst to them, he had what’s known as Usher Syndrome, which also causes gradual blindness due to Retinitis Pigmentosa—starting at birth.

The doctors said the Tracy’s best option was to place John in an institution for retarded children at age six. The Tracys would hear none of that and promptly went to work talking to him, reading him nursery rhymes, playing games with him… loving him.

“Spence,” said Lyles, “was absolutely marvelous with him;” but “gave all credit to (Louise)” for John’s progress.

Early on she “kept repeating the word ‘talk’… a hundred… sometimes three hundred times” in twice or thrice daily “exercises.” One day, said Lyles, when she finished, John, then 3 or 4, leaned his head close to hers and said, “talk”—his very first word.

Tragedy again visited when John contracted polio at age six, leaving him with a withered right leg. That same year, Lyles recounted, Louise “gave up her career to devote herself entirely to her son and studied everything she could get her hands on about (educating deaf children).” No institution existed that worked with parents of deaf children, teaching them how to help their children develop a bridge to the speaking, hearing world.

Meanwhile, John’s travails motivated Spencer to work that much harder so he could give his son all the financial help he needed to overcome his disability. Thus did he overcome what his good friend and fellow actor Lynne Overman said was a tendency toward laziness, thereby becoming the acting legend he was.

John learned how to lip-read perfectly and to speak, read and write and was fully functioning by age 11, when he began to write his daily journals. Three years later, he started “publishing” his “Newsy News” for friends and family.

When John was 17, Louise first spoke publicly, in her lovely English-accented tones, about raising and educating a deaf child. Her speech at the University of Southern California led her, a year later, in 1942, to found, in a campus bungalow, with Spencer’s money, the John Tracy Clinic. http://www.jtc.org/ It became the only such entity worldwide to provide gratis service to parents of infants and preschool children born with hearing losses.

Walt Disney, with whom the family played polo at the Will Rogers Ranch and The Riviera Polo Club, was one of the original board members.

In 1975, poignancy overflowing, Louise was the first recipient of the Father Flanagan Award for her special service to youth; and, around the same time, she helped establish the Boys Town National Research Hospital for Usher Syndrome: Boys Town, saved from bankruptcy and oblivion by Spencer Tracy’s Oscar-winning performance as Father Flanagan, was now rescuing those who suffer John’s same sensory afflictions.

John was always intent, as his son and fellow artist, Joseph Spencer Tracy, characterized it, on living “each day to the fullest, regardless” of his daily challenges.

“I’m an artist, writer, photographer; I played polo, tennis; swim, water-ski, dance,” he wrote in his journal in 1975. “ I got married, had a family. I’m also profoundly deaf, going blind, had polio. What can you do?”

Endowed with a high IQ and an athlete’s body, he energetically poured himself into life, blissfully unaware of his multiple disabilities until he was in his twenties.

He loved horses, which mirrored his own “gentle” spirit, and the invigorating sense of freedom riding gave him: It reminded him of his “favorite” times of life at the family ranch in Encino (1936-1955), so full of fond memories like the day he started playing polo at age 12. (He had only begun riding three years earlier.) That day, one of the players was injured and Spencer summoned him to come on down!

Through it all, he had, said Cyndi, a “tremendous sense of humor” and the “charm of an angel.” Fittingly, he did a dead-on impersonation of his father, which no professional comedian has ever attempted.

John graduated from Pasadena City College then attended Chouinard Art Institute, graduating in 1955, the same year his son was born. He subsequently worked at Walt Disney Studios in the props department for nearly five years, until his eyesight started failing. But, he continued doing his watercolor paintings and pen and ink and pencil drawings, as he was able to: He was declared legally blind in the early eighties and, by 1994, was totally blind. 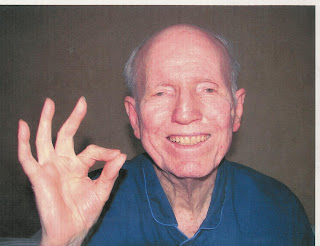 John Tracy in 2004
“The moment you met him,” said Cyndi, “your life was changed. You knew that you were in the company of someone… great, who was, at the same time, the most humble person you would ever meet.” Quite simply, he had no idea how positively he impacted others’ lives.

John attended Sunday services at All Saints Episcopal Church in Beverly Hills for decades with his mother, who died in 1983. He would also pray nightly in an elaborate ritual that, Cyndi said, revealed his “darling personality.” The family—Joe’s family, sister Susie, the cousins, among others—“was lined up in the (same) order every night.” But “all his friends and acquaintances were always jockeying for position.”

“He was strong until the end,” said Joe, and “always prayed for other people, didn’t pray for himself”—a lesson in selflessness he communicated to his three grandchildren.

As for actually communicating with words, John could talk, but his deafness combined with his blindness required some special techniques for his family to reply back.

Cyndi described how he loved to converse and remembered with particular warmth those special times, often at the end of a long day, she would be perched next to him as he would regale her with fascinating stories. And, she would reply by spelling words on his back. Or, for shorter responses, she would spell words on his hand—a hand that so often held her hand, while tapping her other hand, as he said, “God bless you, Cyndi. Thank you. ”

For, whatever else he was, John Tracy was always profoundly grateful for all life’s blessings.

Today is the 111th anniversary of Spencer Tracy's birth. He was born in Milwaukee, Wisconsin on April 5, 1900.